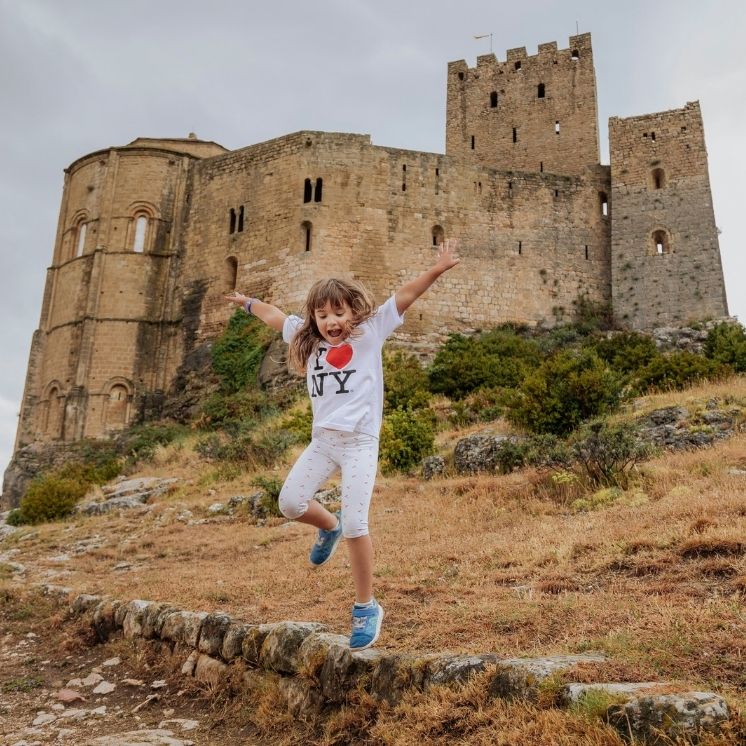 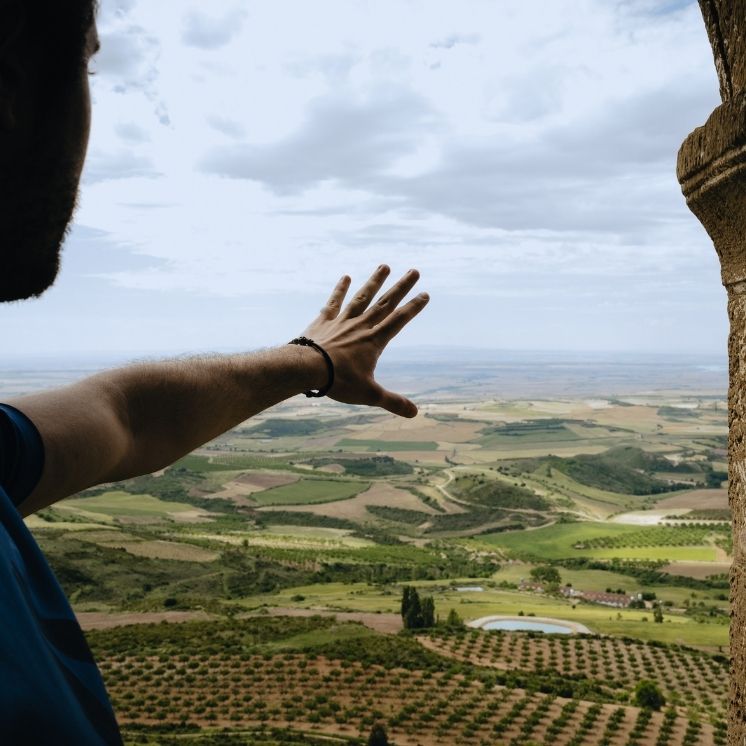 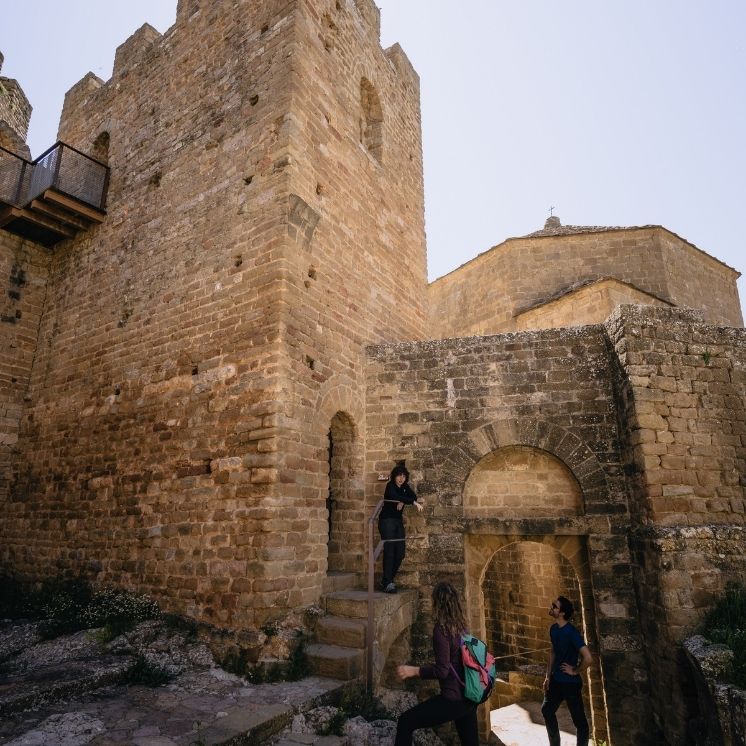 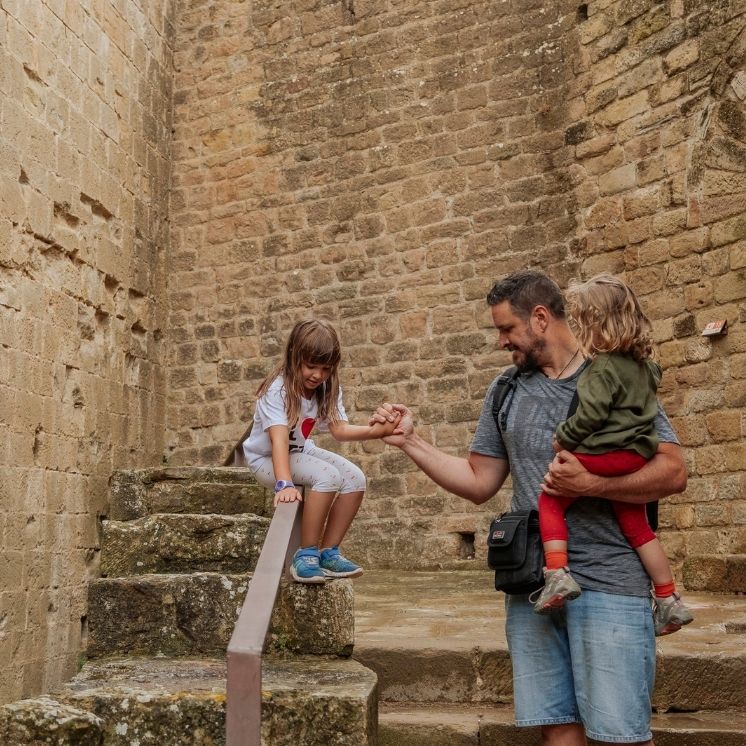 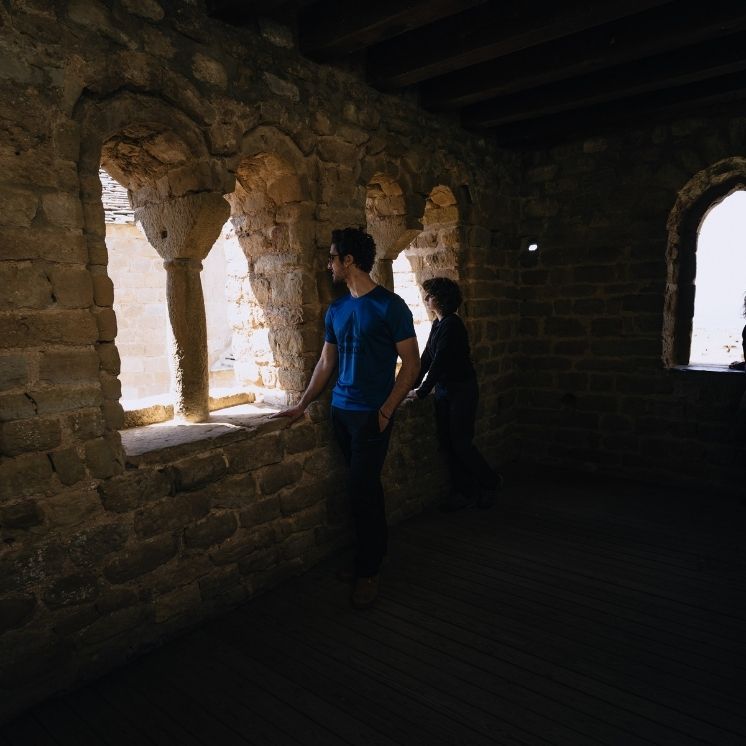 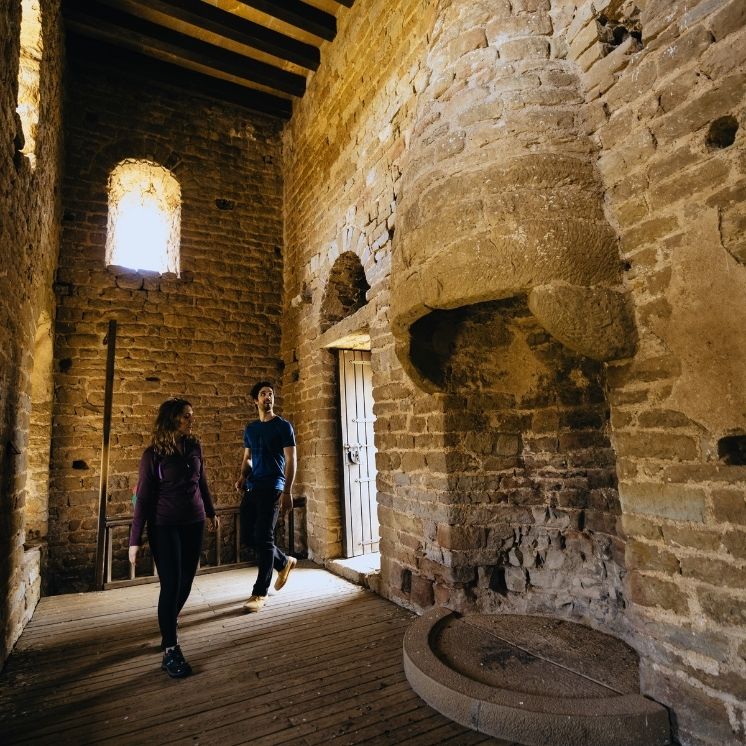 Unique. Imposing. Impregnable. Awe-inspiring. This is the castle of Loarre. The most beautiful Romanesque military castle in the world. A familiar silhouette that takes us directly to the heart of the pre-Pyrenees.
The castle was the epicentre of the conquest of Huesca and Bolea, but after achieving the surrender of these places, it was no longer necessary. It remained active until the fifteenth century when it was abandoned. That was our good luck because since it was not required, it has not undergone any subsequent modification and what we see is a unique and exclusively Romanesque monument in its original state. National Geographic recently declared it to be one of the most beautiful castles in the world.

How do you play Hunt the Treasure?
We’re going to give you some clues so you can find the treasure. They are spread throughout the city, and you need to get them in the correct order. Remember to bring paper and pen. When you have them all, you will have the key to unlocking the location of the gold coins. At the bottom of the page, you have access to the treasure. You have to enter the clue numbers in the correct order: the first number of the first clue, the second number of the second clue, and so on.

The first question you ask yourself when you view the impressive castle from its walls, is how many stonemasons and sculptors worked on the construction of this castle?
The castle stands alone today, but before, the town of Loarre had nestled at its feet. The perimeter wall you see, with its ten semi-circular towers, its doors and its grandeur, is probably the second wall that was built.
At the end of the thirteenth century, after the attack and looting that the town had suffered in 1287 at the hands of Don Pedro, lord of the barony of Ayerbe, it was decided to build the wall. Although probably there had previously been some sort of wall during the time of Sancho Ramírez (1096). 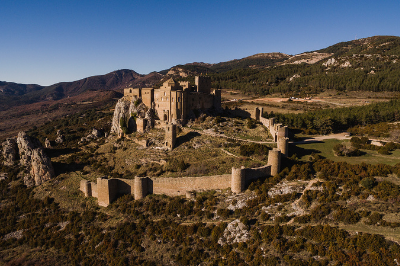 The door of the Kings is to the south. You will not be able to imagine it before you see it. It is the entrance to the castle from the old town of Loarre. Remember that the kings that occupied this castle did not want great pomp, but rather somewhere to save their own lives or at least sell them dearly.
All the towers of the wall are semi-circular – or perhaps not all of them? How many sides does the tower of the Door of Kings (Puerta de Los Reyes) have?

In some publications, you will read that this was a watchtower or part of the castle defence. It is not true. This tower was the bell tower of the church of the old town of Loarre, which was located at the foot of the castle. Here, you can still see part of the foundations of some of the houses, and the cemetery, with headstones.
An Albarrana tower is one from which the access door to a fortification is defended. But what is this tower defending? Nothing. What’s more, it was built after the castle. And it is too far below the castle to be a watchtower. 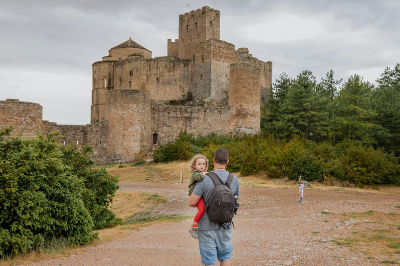 The tower of the old Church of Loarre is topped by a spherical dome. A construction marvel of its time. It has two stylised windows on both sides, separated by a column in the middle. What is that column called? Add up the letters.

CLUE NO.3 PORCH, STAIRCASE AND CRYPT OF SANTA QUITERIA.

The volume and solemnity of Romanesque construction are with us, right from the entrance.
In the frieze above the door, there is a group of sculptures where the image of the Christ in Majesty stands out in an almond-shaped surround, together with the images of the four evangelists and some angels. The ornate decoration is topped by a lintel with corbels and stone figures.
The staircase is impressive, with its height and its dome. It seems to go up forever, but do not worry – it does not reach heaven. Notice that before the start of the dome there is a typical Aragonese Romanesque element – chequered “Jaqués” stonework.
The Santa Quiteria crypt is accessed from halfway up the staircase. Originally it was connected to the Church of San Pedro, which is on a higher level. Here, the relics of San Demetrio of Thessalonica were worshipped, before they were transferred to the Church of St. Stephen (San Esteban) in Loarre. Go slowly here. You have to get used to the dim light to see it well. It’s worth waiting. And above all, check the impressive acoustics by speaking from the altar. 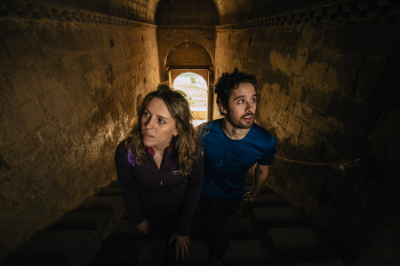 When you enter the castle, there are two stone chapiters at the entrance. They are a warning! Take care! In one, Abraham’s blind faith is represented by him surrendering his son to God; in the other, there are crouching monkeys. They represent a parody of humans and especially of lust. So now you know: leave out human passions and have faith or God from above will judge you.
How many monkeys are on the chapiter at the entrance?

The architectural perfection, the size and height of the nave; the dome and the decoration of the sanctuary with its semi-circular arches; the imposts with chequered stonework, and the decorated chapiters confirm that you are in a church worthy of kings.

On the fourteen chapiters of the decorative arches, the medieval masters combined the plant-like decoration with figurative carvings that sometimes are very difficult to interpret. But on other occasions, like with the representation of Daniel, they are very easy to understand.

Some are very high and are hardly visible. So that you do not miss a detail, we leave you an interactive map with the chapiters of A. García Omedes. 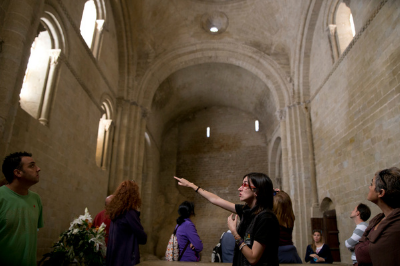 A rarity that you can see in the Church of San Pedro is the impressive hemispherical dome in the centre of the temple. It was not easy to do; it was a very innovative system for its time and reminds us of Saint Sophia of Byzantium with which it has many similarities in terms of its structure.
In the sanctuary, there are a series of arches, but none are lit. How many allow light to enter?

King Sancho Ramírez installed a monastery in the castle for canons regular of the order of San Agustín, who had been in Loarre for just twenty-six years.
Having more people meant that the castle had to be modified to house them and for that reason, the north pavilions were built. Initially, the sleeping area of the monastery had two floors. The wooden top floor has been lost. Look how small these sleeping quarters are. Perhaps that’s why they call them cells. 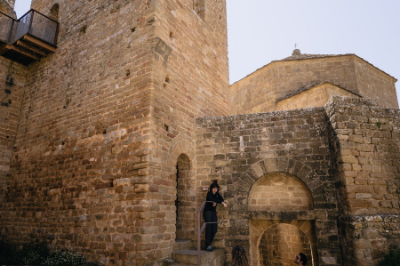 In the North Pavilion, there is a cell that is unlike the others – it is vaulted and would surely be for someone with higher lineage or reputation. Perhaps the Abbot? Inside there is a name engraved in stone. Find it. Count its letters, and you will have a clue.

CLUE NO.6 THE THREE TOWERS

You are going to enter the primitive enclosure of the castle of Loarre.
The three towers, of the Queen, of Homage and the North, are all in the Lombard Romanesque style. Look at the way the stonemasons carved these stones, called Dimension Stones, with an elongated format, but smaller than the blocks you’ve seen in the church of San Pedro and without stonemasons’ marks.
The Tower of the Queen served as the defence of the main door and residence.
Thirty-one meters high, the Homage Tower is one of the best examples of military architecture of the eleventh century. It has five small rooms, one with a fireplace and another that was a toilet. From it, through its small holes, you can see what is happening outside.
The third tower is in the courtyard, and its state of conservation is worse than the others. 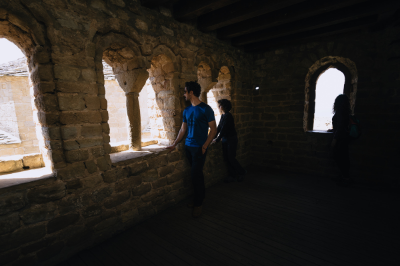 There is much speculation and many theories about the towers of Loarre. Maybe what we now know as the Homage Tower was actually the Lookout Tower, and that the North Tower was the original Homage Tower, and that the Queen’s Tower was not even habitable. Just theories, though.
What is certain is that the Queen’s Tower is an excellent example of Lombard Romanesque architecture and is very elegant with, how many windows?

CLUE NO.7 THE QUEEN’S LOOKOUT

With that name the imagination flies and pictures the queen in her palace. But remember, Loarre is a military fortress with a monastic community inside. The Queen and women, in general, had to keep a low profile in the Loarre of the X-XIII centuries.
The Queen’s lookout and its magnificent views gave light to a pavilion that no longer exists. What was the function of the pavilion? We do not know. A monastic library? Let your imagination decide. 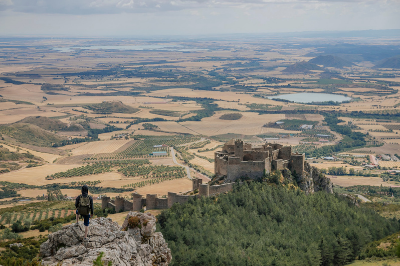 From the lookout point, you have a beautiful view of the plain of the Hoya de Huesca. The craggy harshness of Loarre castle and its mountains contrast with the calm plain that lies at its feet. From the lookout, can you count how many bodies of water are to be seen? That will be your clue.

The people who lived in the lower part of the fortress moved, around the year 1500, to the village of San Esteban de la Huerta, which was henceforth called Loarre. Life on the plain was going to be much easier for the inhabitants of the castle’s steep location.
And they took with them the relics of St. Demetrius of Thessalonica that were previously in the crypt of the castle, having arrived there in the following way: “Two French clerics passed through the Pyrenees with a mule loaded with the chest full of the relics of San Demetrio. Upon arrival in Jaca, all the church bells of all the churches began to ring. The Jacetanos, eager that the treasure stays in Jaca, and upon the refusal of the clergymen to abandon the relics, blinded the mule and decided that the relics should remain wherever the animal stopped. The mule began to walk until it came to the castle of Loarre. At the foot of the castle walls, the mule died, and the relics remained in the castle. “ 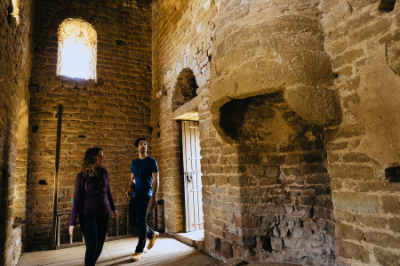 The history of the relics can be seen on the wall of the church of Loarre. It is recreated with great detail. Do not forget to look at the chest that held the relics – a Romanesque jewel. How many human figures are represented on the front of the chest?