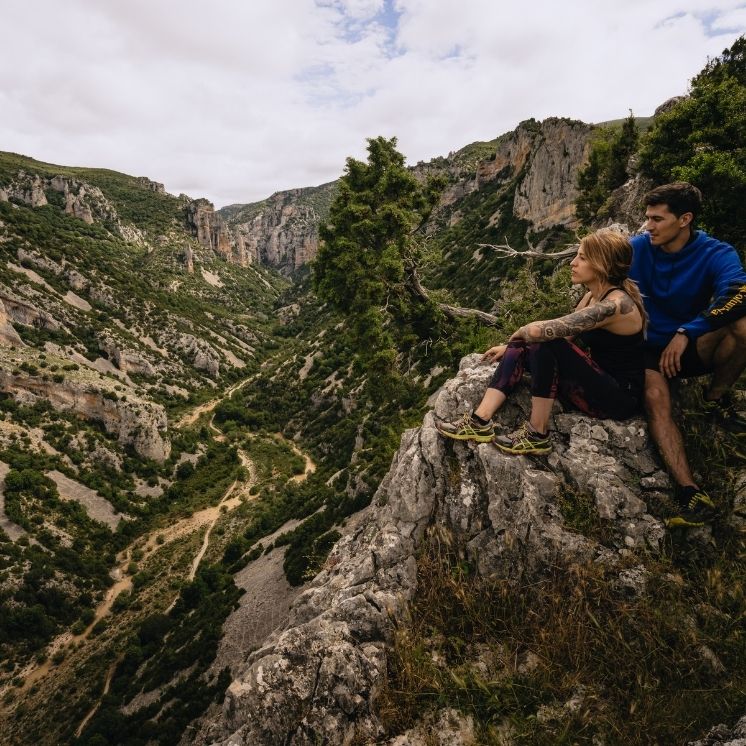 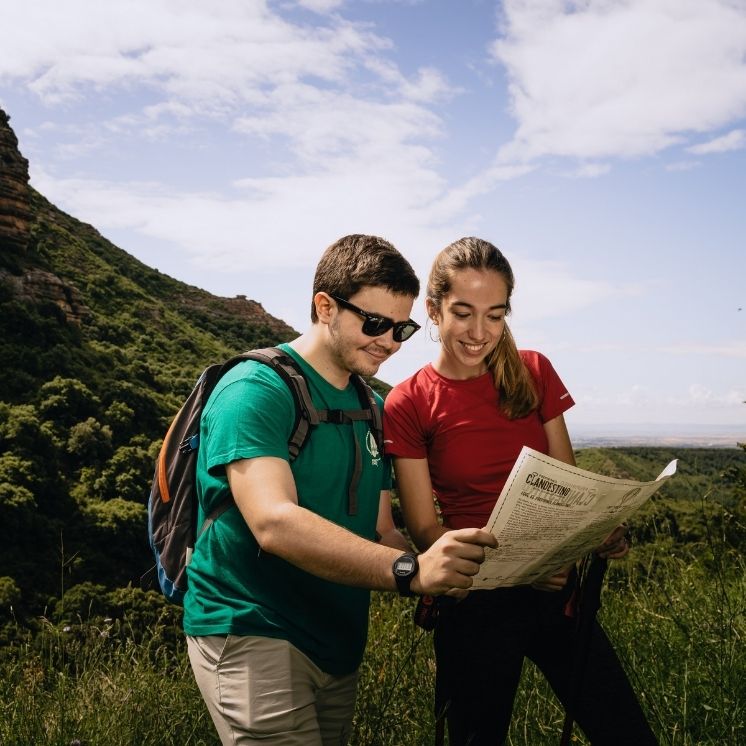 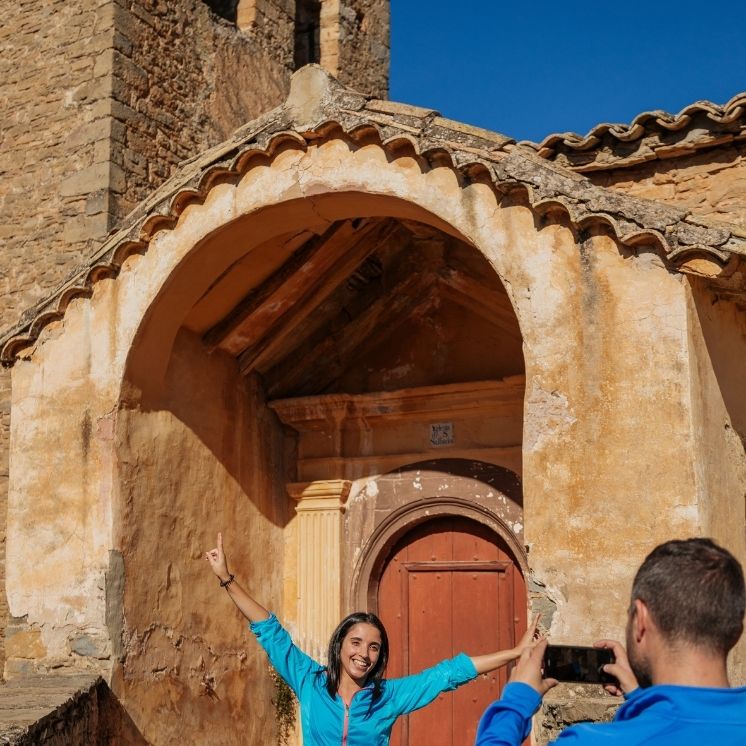 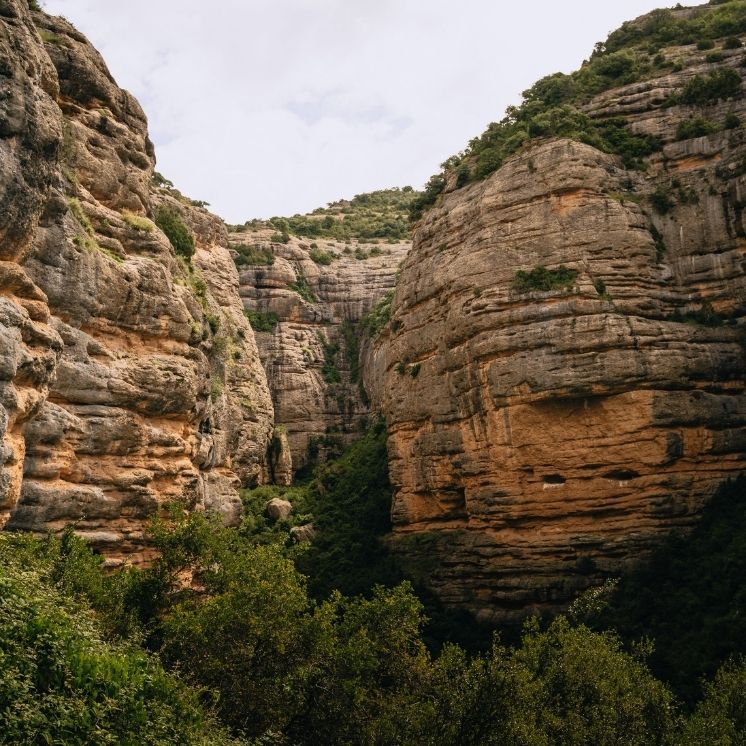 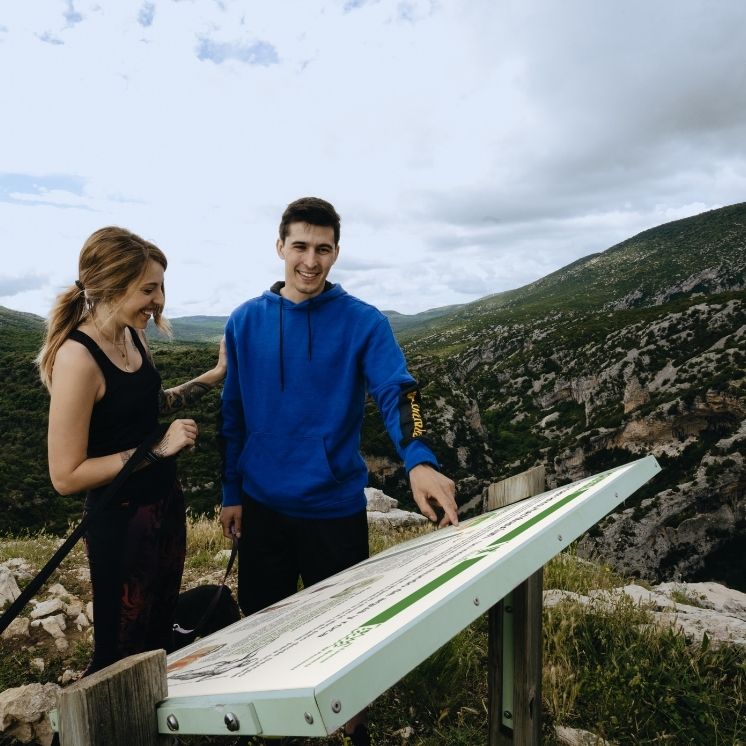 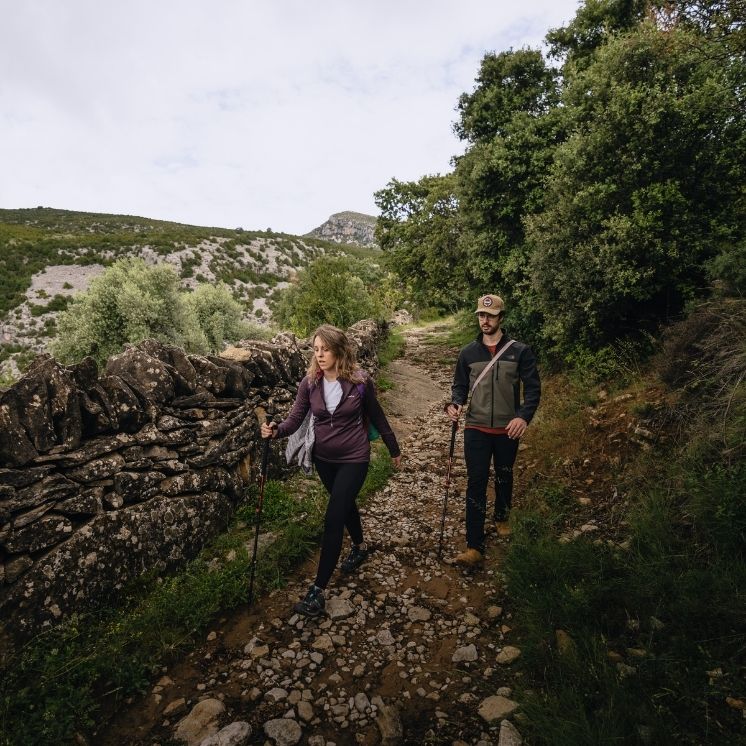 Guara is not just ravines and canyons. Neither is it just whimsical limestone formations, and territory where you can live a thousand and one adventures or landscapes that take your breath away. No. Guara is much more. It is not possible to understand these mountains without remembering the exodus of the 1960s and 1970s. And without counting its new residents who year after year come with new enthusiasm, new ideas and lots of desire to get things done.
This road is a long one. Each of the stages are routes in which you will have to walk for at least a couple of hours. We have hidden a treasure in each of the locations.

After the town of San Julián de Banzo, we will arrive at the car park of the San Martín cañon, from where the signposted path to the hermitage of San Martín de la Val d’Onsera begins. In the “Puerta del Cierzo” we will continue along the “Donkey Trail”.
Finally, we reach the hermitage of San Martin de la Val d’Onsera, located at the bottom of the ravine, next to a small waterfall. Do you dare to get wet?
The origin of this hermitage is not known with certainty, although it is believed to be of Visigoth origin. At one time it was a monastery, but at the end of the sixteenth century the building was left in charge of a single hermit and its history faded, more or less unnoticed, until its final decline when it was looted during the Spanish Civil War. Throughout history, many kings and nobles have come to the sacred place begging for offspring, since according to tradition, during the Middle Ages the site was linked to myths of fertility. Aragonese kings and nobles hoping for a male heir would come to the hermitage. Today, it is a place of pilgrimage. 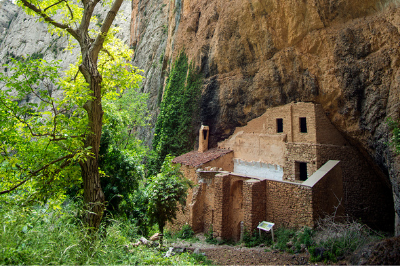 This is the location of the Geocache: N 42° 14.382 W 000° 17.259
Hint: About 2/3 of the way along the channel you will find an open space (like a cave but with high ceilings) on both sides. At shoulder height (in the “roof”), behind stones, you will find it.
TAKE CARE! It is a challenging route, and while it is well maintained and very safe, you need to go appropriately equipped for trekking.
Placed by: geocachingextremteam-AGUANAGUANGA

We hope you have brought a bathing suit! The route through Pedruel has stretches where you will want to take a swim. We start from the campsite “El Puente”, where we can leave our vehicle and continue on a path that descends to the medieval bridge of Pedruel: Isn’t it beautiful? The first stop for a swim! Here, many campers and hikers make a stop to enjoy the river. By the way, do you know the name of the river? It is the Alcanadre river.
Do you know what they call this type of body of water in Aragon? They call them “badinas”.
If you would like to follow a small route to more badinas, just follow the track that goes to the right after crossing the bridge. Soon you will arrive at another badina of 200 meters in length, that of Barrasil Ravine, and later, the Badina Bibazuala and Badina d’os Estrechos.. 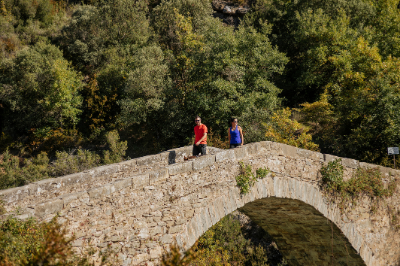 The Virgin of the Castle of Rodellar is located in one of the best-known canyons in Guara: El Mascún. In one of its spurs, a well-located castle was built in the ninth century. On the remains of that castle, which are no longer visible, the Hermitage of the Virgen del Castillo was built. From this point you can see the river Mascún from Otín to Rodellar, the incredible stone forest called “The Citadel” and also, from here, you can see “The Dolphin”, a bizarre and emblematic rock formation.
How to get there? Cross the Rodellar square, and a track at the end on the right leads us to a group of houses. The track is well marked, and you can see the hermitage as you make your way towards it. It is a trip of about an hour and a half along a road that offers fantastic views that accompany us as we walk towards the hermitage. The hermitage is tiny. It is a place of pilgrimage to which, on one Sunday in May, they carry a beautiful Romanesque carving of the Virgin. 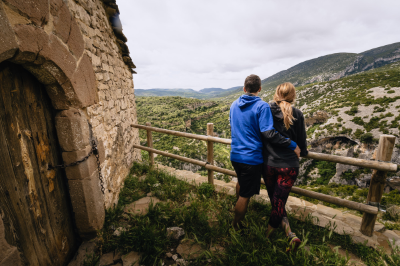 The path that you have to follow to reach the Gorgas de San Julián starts from the “Golf de Guara” urbanisation, between Arascués and Nueno, where you will leave the car to continue on foot along a route signposted as PR-HU 112. Once on the path, follow the signs in the direction of San Julián.
Passing through the ravine of San Julián, we reach the Gorges. Do you feel tiny walking between these high rock walls? One of the curiosities of this place is the mountain nativity scene created by the Peña Guara mountain club and located in one of the cavities. Can you find it?
The gorges pathway ends here, so it is time to go back and continue in the direction of the hermitage of San Julián, which is very close by.
What a tiny hermitage! If it were not for the signs, it might go unnoticed, as it is completely camouflaged in the rock. 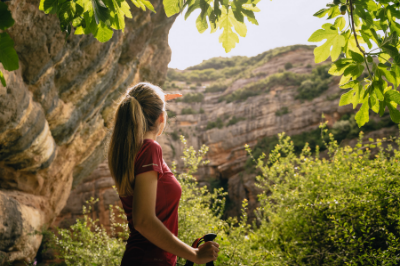 Our route to the hermitage of San Cosme and San Damián begins in the parking lot of the Vadiello reservoir. We go through a small tunnel and arrive at the dam from where out route departs.
What is that little house at the side of the road? Do you see it? Let’s look more closely. On the sign, it says “Hermitage of the Holy Cross” … although it does not seem to be a hermitage.
Do you know what it is? It is an ESCONJURADERO. Did you know that word? It means “hideaway” or “shelter” These shelters are very common in the area of the Aragonese Pyrenees. They were built between the sixteenth and eighteenth centuries and were used to shelter from storms or other meteorological phenomena. What a surprise to find one on our route!
This place has always been an important point of pilgrimage and devotion. Many centuries ago it was a place dedicated to pagan divinities supposedly bringing good health to worshippers. Later, with Christianity, it became the hermitage of San Cosme and San Damián, patrons of medicine.
Further on, along the path we are following, is the hermitage of Fuensanta. A perfect place to take a break, drink at the fountain and eat something. By the way, have you seen how many local kermes oak trees there are? At the beginning of the 20th century, the wood of this tree was one of the primary sources of combustible carbon, which is why this area was worked by charcoal burners. When they cut the trunk to take the wood, the tree would grow again with several trunks as if it were a bouquet.
We follow the road to the Egg of San Cosme, an impressive geological formation. If you have good binoculars at hand, use them to observe the various birds of prey that nest in this wilderness and its surroundings. 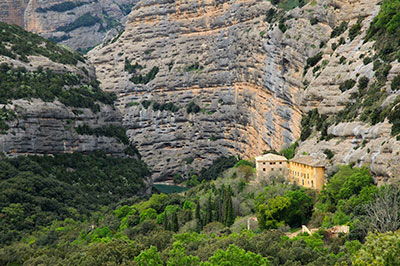 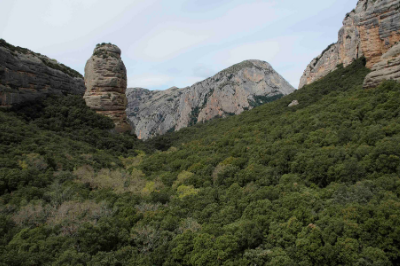